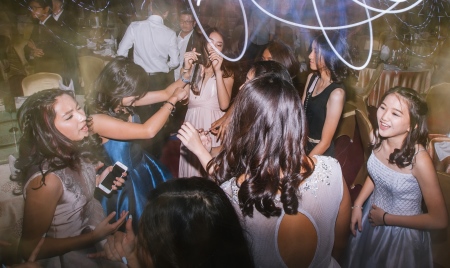 It’s been a remarkable year for the 2016-17 OSIS team. The Yule Ball was the final event presented by them. Our High School Coordinating Principal, Mr. Bret Olson brought the Ball to the next level with his DJ act, it was awesome! The Yule Ball was such a hit, it was clear that all in attendance had a great night.

As their Coordinator, I would like to use this chance to say thank you to our OSIS team.

We began with 6 pairs of candidates, from which Louise and Russel were elected as Captain and Vice-Captain.

They led us through the 2016-17 school year with: A�TheA�Sekolah Ciputra Soccer Competition, Ciputra’s Got Talent, our internal OCL and OCBL. Also, don’t forget about Halloween, Christmas, Valentinea��s and Kartini Free Clothes Day. 2016-2017 was a really eventful year!A� Despite constant challenges and obstacles, this team never gave up, they just kept on moving forward to make all those events happen.

The 2016-17 OSIS members will present their final assembly to all High School Students byA�September 8th. On that day we will officially pass the organisationa��s leadership on to the newly elected Captain and Vice-Captain. OSIS membership recruitment for 2017-2018 will be opened shortly after theA�September 8thA�assembly.

Keep your eyes on our OSIS notice boards!