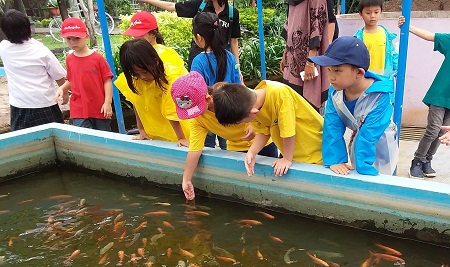 We viewed many different plants and animals. Students were able to identify lemon trees, eggplant, cabbages, lettuces, tomatoes, dragon fruit, jackfruit, guava and lots more! Wow, we had never seen so many things growing. We even tried eating some celery, which probably tastes better in soup! We saw where small seedlings were planted and later grew into bigger plants. One of the highlights was the animals. We let the small therapy fish nibble at our hands and looked at the Koi fish and big hungry catfish too. There were lots of goats with long ears and some of adults had horns. The baby goats are called kids, and were very cute and we were lucky enough to be allowed to feed them leaves. We also saw lots of rabbits. They hopped up to us to eat a carrot or kangkung and they let us pat them. They were all different colours and sizes, even very tiny pink baby rabbits that had no fur and had not yet opened their eyes.

We saw and learned a lot about the life cycle of plants and animals to help us understand our unit on a�?Living Things.