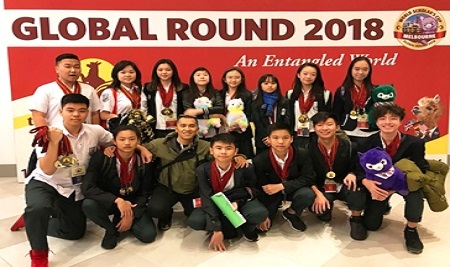 As our plane landed safely at Juanda International Airport on Wednesday, 22nd August, our journey at the World Scholar’s Cup Global Round 2018 in Melbourne officially ended. It was a challenging adventure for our 15 students. Their hard work started in the previous academic year; studying, practicing and exchanging information and content between team mates. The real test was done during WSC Regional Round, Surabaya last May. The level of the competition increased again at the Global Round in Kuala Lumpur by competing against hundreds of other great teams from around the globe. This included writing essays, test-like challenges, quizzes, debates and also having time to socialize between other scholars.

The result, in my perspective, was beyond expectation as most of our students were first timers to a WSC. To be the best, or on top, is good, but the important thing is they all did their very best. Some students were disappointed because they didn’t qualify for the Tournament of Champions in Yale University in November. But overall, they had good results.

We would like to say thank you to everyone for supporting us. It could not happen if we didn’t have the support of Teachers, Staff, Principals and Parents.

Finally, not only did The Global Round in Melbourne give our students an opportunity to learn different skills and knowledge, Melbourne is truly a nice city to explore. I also got the chance to meet up with a few of our Alumni who are studying in Melbourne. Classes of 2014, 2015, 2016, 2017 and 2018. It was like a small reunion. They miss Sekolah Ciputra, and seeing me show up was like a small fragment, or a piece of memory, that reminds them of school. It’s always good to see our Sekolah Ciputra Family reunited. Wherever they are, our students are still our students, even after they graduate.