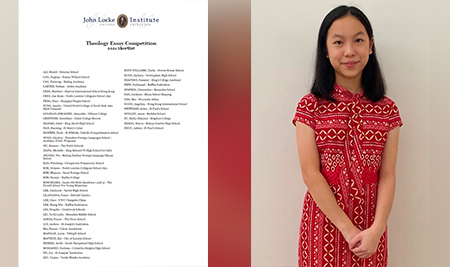 In early 2021, I discovered the John Locke Institute’s essay competition. It works as such: the committee provides a range of topics, and encased in each is three challenging debatable prompts. Students are required to select only one prompt and respond to it in an essay no longer than 2000 words. The essays are then to be judged and shortlisted, from which winners will be selected.

Out of all the prompts, I was particularly drawn to a theology question which asked, ‘Is Christianity* a religion of peace?’ As a Catholic, I had never really questioned peace in my faith. But just by reading the prompt my perspective towards Christianity had shifted. At this point I began wondering about scenarios in the Bible that contradicted Christian dogma, such as why the Ten Commandments doesn’t allow killing, yet God commanded killing in several instances.

The debate on this issue was no less than controversial, and it was extremely complex considering the various elements one had to consider to produce an argument. After 16 years of believing, I was determined to prove that the religion I had held onto for so long was peaceful—at least, its foundational values were. I attempted to prove that Christianity was a religion of peace by looking at the Old Testament, the New Testament, actions that have been claimed to be of divine will, and examples of Christian-inspired peace in the modern world. That way, I covered a large scope of the elements that proved Christianity’s peaceful nature.

On July 15, 2021, I received an email from the John Locke Institute stating that my essay was among the 50 theology essays that had been shortlisted. I was grateful that my research, writing, and proofreading had led up to this achievement. An immense thank you to the teachers that guided me through writing this essay. The prize winners will be announced in September 2021.

*Christianity refers to beliefs derived from Jesus Christ, centered upon the Bible, and acknowledged by Roman, Eastern Orthodox, and Protestant Churches (Stefon).