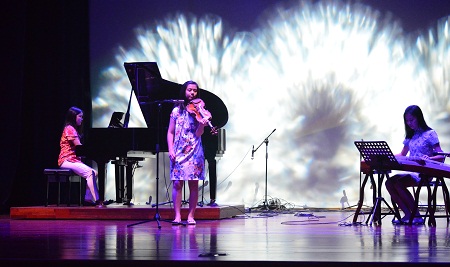 Ciputra’s Got Talent is one of the many events OSIS has held throughout 2017-2018. This is chance to showcase the abundant talent from a vast range of Sekolah Ciputra students.

We created this event in the hope of being able to give the students an opportunity to challenge themselves by performing in front of a large audience and help students develop their talents into something more. Also, it serves to balance the intensive academic life that Sekolah Ciputra students go through daily.

We opened for registrations in December 2017 through to mid January 2018. During this period, we had 24 teams (around 80 students) who joined for our auditions. We then had to select the best 14 performances to take to the stage for Ciputra’s Got Talent on Tuesday, 30th January 2018.

As head of the OSIS Arts Department, I would like to thank the contestants who participated in the event, the judges, the Multimedia team, and the OSIS team. This event wouldn’t have gone so smoothly if it weren’t for the support this event had and the overwhelming spirit the OSIS team carried with them.

Special thanks to members of my department for being the backbone of the event, we are very thankful to have you all!
It truly has been one of the best talent shows that Sekolah Ciputra has ever hosted.
Thank you for helping the OSIS team get here!