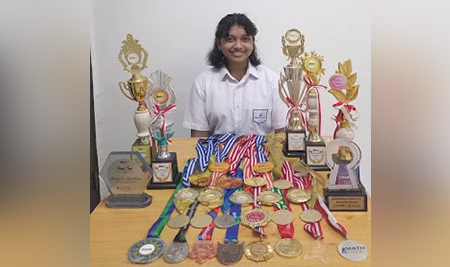 Last June, Sekolah Ciputra registered me for the Mental Maths Asia Cup 2021, which was a mental math competition held online through an app called Live Math Competition and League. I was included in the grandmaster level, which was for Grade 6 and above. I started preparing for the competition two weeks in advance, through the app provided. I practiced by reviewing my scores after each round and challenged myself to perform better with every practice. The practice went on and on until the competition day. In the competition, the participants can take the test 3 times and the total score will decide the participants for the Grand Final round. I pushed myself to get a higher score in every round. The semi final round gives 10 points for each correct answer and -2 points for a wrong answer. I got to answer as many questions as I could in 7 minutes for each round. I scored 858 points for the 1st round, which is 85 questions, 866 points for the 2nd round, which is 86 questions, and 862 points for the last round which is also 86 questions. The total score for all 3 rounds is 2584. We were not allowed to use a calculator and only count with our brains. The semi finale result came out after 15 days. I was rank #1 in school, rank #1 in Indonesia, and rank #17 in Asia, with a grade of A. The grand finale was on 10th September. I had less time to practice as I had a lot of schoolwork and it was harder than the previous round, but I still tried my very best. It was a live competition through zoom, so we had to turn on the camera and make sure we didn’t have a calculator or anyone around us. There was only one round of 100 questions to answer in 12 minutes, and I could skip questions. My strategy was that I skipped questions that took too long to answer. In the end, I answered around 80% of the questions and the results will be announced in 15 days, so I am hoping for a good result.

My tips for loving maths are to enjoy the process and understand the formulas. Once you understand the concept and the basics, it won’t be hard to apply them to other math problems. Practicing is a key point in Maths. Maths is fun once you can get a grip on it! It would also be amazing if you can join competitions to test your math skills, challenge yourself, and have more experience!

I would also like to thank Sekolah Ciputra for choosing me to take part in this competition and I am ready to involve myself in future competitions and bring pride to the school, my parents and myself.