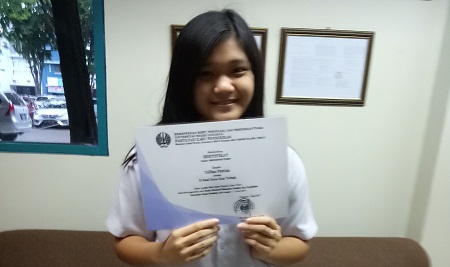 This was an essay competition with the theme “Potret Pendidikan di Indonesia”. I had to write an essay with a maximum of 1000 words. I wrote about how the education in Indonesia works including how effective, and the effect, on Indonesian students. This was an online competition so I was able to submit my essay through email. The jury announced the results on their Instagram page called “bemfipunesa” 3rd June 2017. I wrote the essay in a week including planning the structure, researching the information and typing up the essay. It was a little bit tough for me as it was a short essay competition that needed to contain all the detail and information to back up my argument. Additionally, it was my first essay competition. The struggle didn’t end there, I had to compete with the other regional high schools.

At the beginning, it was just an interest to join the competition as I like to write essays and other literature works. For this competition I was inspired by the students in Sekolah Ciputra, considering that the theme is about education. I wanted to convey my feelings about education in Indonesia through this essay. I tried my best to inform my thoughts about the pros and cons of education in Indonesia. I wrote my essay from a student’s point of view, hoping that the reader of my essay will understand how students think about the education system in Indonesia.