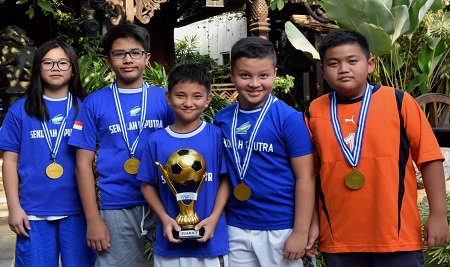 Once we signed up to this event, we all got together to practice on the 27th June as we were scheduled to play on the 29th. During practice, Mr Farid taught us to shoot on target and dribble the ball amongst each other. Lastly, we played a full soccer game then Mr Farid bought us drinks. The next day we rested for our own health so that during game time we are healthy and energized.

At the opening ceremony, there were many dance routines and magic tricks. We then started the competition by playing against SAB (Sekolah Anak Bangsa). The final score of the match was 4-1, to us. We waited so long for our second game to start which was against our own little brother, the Ciputra A. At first I underestimated them, but when we started to play, it seems that they are fast and got many chances to score. After that game, I learnt something new, not to underestimate others who are smaller than you or overestimate others too. On our last game, we played against SDN Jagir. This game was the final and would determine who would be first and second. Before the game I prayed to god to give me energy, power, and strength. At the time I were so nervous, almost all the people in Ciputra World watched us play. Our final score was 2-2. But because we had more points than SDN Jagir, we won and came first in this competition.