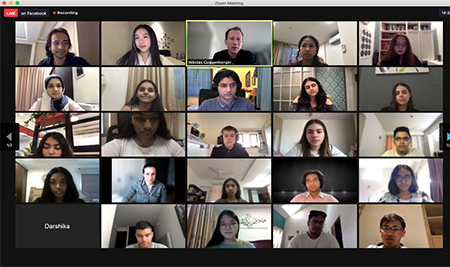 I was nominated by the school to attend an online Q&A session with Professor Nikolas Guggenberger – the Executive Director of the Information Society Project at Yale Law School.

The topic discussed was ‘The Data Economy’ – how law and technology intersects in this era of ‘Big Tech’, surveillance capitalism, and a data-driven economy. We addressed potential solutions towards creating a more inclusive, satisfying, and more equitable internet environment.

I asked Professor Guggenberger how we, as Gen-Z, can work to ensure these conversations are opened up and made more accessible to the populations of developing countries – who are outside the Western-dominated spheres of mainstream discourse about regulating the tech world.

His response – for starters – was that my question was “incredibly hard” and “loaded” (fair enough!). Though, he suggested that it requires an acknowledgement of the existing power structures in this industry. His solution is to reduce the economic and political power of the largest corporations that dominate the ‘Big Tech’ ecosystem.

His insights were thought-provoking, and allowed me to make connections to topics I learned while doing IB Economics at school.

Considering my genuine interest in the social sciences as well as the tech industry, I was proud to represent my school (and Indonesia) in this priceless opportunity which allowed me to gain further insight into these fields and my future ambitions.