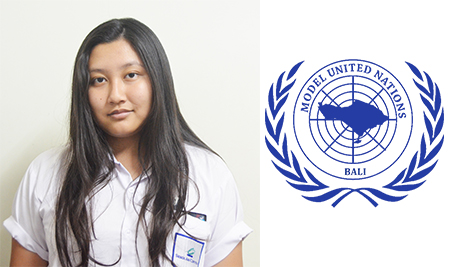 Model United Nations (MUN) is one of many extra-curricular activity choices at Sekolah Ciputra. It is a simulation where students’ roleplay as delegates of countries, who in reality are part of the United Nations Conference, and are assigned with different committees. In each committee, every delegate is expected to team up and form allies with other delegates, producing resolutions on a certain topic which would later be discussed and debated further with all the delegates in the committee room.

I was part of Sekolah Ciputra’s MUN team and I am pleased to say that our school took part in Bali MUN’s 7th Conference which was held on the 1st and 2nd of November. The conference theme was “Global Governance and the Rise of New Threats”. This was a two day event filled with a very tight agenda; the first day consisted of the Opening Ceremony, Lobbying and a Social Night then continuing on to the Debate Session and Closing Ceremony on the second day.

Bali MUN wasn’t only new to Sekolah Ciputra, but was also my very first experience that involved public speaking. On the first day, as I saw all the other delegates that gathered in the room, I began to lose my confidence. I started to doubt myself as I saw numerous delegates standing up tall with optimism in their eyes. Many had years of experience with MUN, leaving me feeling behind with a hollow MUN-background. My lack of experience really did show when it came to speaking up on the podium, but I am never one to give up.

Having to produce resolutions with experienced delegates who represented powerful countries and sitting between two of the most strong and potent delegates who kept on raising their placards didn’t drag me down. Instead, it urged me to work and commit harder. I learned from tough situations and I broke out of my shell. Stronger delegates who often spoke up to inquire or declaim their agreements or disagreements towards a certain resolution, at times, were still disapproved by the whole room. This made me realise that I should express my perspective and opinion, without having hesitations. I reassured myself that I should speak with certainty and that was the reason I came, to express my perspectives and to do my best! I followed up by raising my placard to speak and produce amendments. I was without doubt proud of myself.

I believe Model United Nations is a great extra-curricular activity. It not only helps to increase confidence, but also helps to learn diplomacy, which is has significant value to use in real-life situations. Aside from educational aspect, Model United Nations serves as a gathering of students from various cities and different parts of the world where students of all ages can take the first step to forming worldwide connections.

The experience is definitely like no other and I am ever so grateful to have been part of this experience.