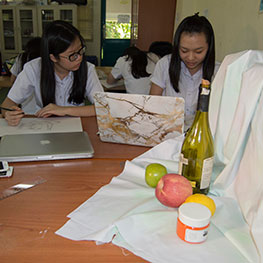 The E5 Model was applied in an Indonesian project for year 10. The project was a Puppet show. Teachers and students used an E5 booklet to transform the traditional puppet show into a modern extravaganza. There were a lot of other creative and innovative products resulting from the puppet show in the middle of term 2.

The E5 stages are: investigating, planning, taking action, communicating, and reflecting. These stages are very useful to help students and teachers achieve their goals and examine their ideas. The questions in the booklet in each E5 element and strand really help students to meet the expectations of the target (the audience) of the puppet show.

One of the target audiences was the school children around the camp area. This meant the Year 10 students had to understand the psychological background of the kids in a traditional village, and modify the story, based on the imagination of the children living in Sendang Biru, Sumber Manjing Wetan, Malang. There were 5 groups which performed, one to represent each class. The groups which were not able to present their puppet show had to perform it in their class to their friends as a summative assessment in Indonesian, during the second and third week of the term.

The modern era brings with it a lot of possibilities for creativity and innovative products. Students changed the image of the puppet show from traditional to modern by combining the puppets with a live performance, modern music, original backgrounds, use of technology, and they also modified the story based on the psychology of the audience.