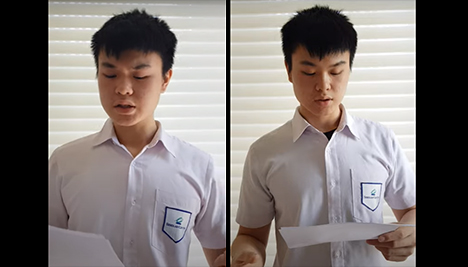 With the combined effort of many teachers and staff members: Andin, Nasya and I were able to participate in the National Schools Debating Championship 2020. Before the debate, we were all very nervous about the competition because it is setup in a way where you could not do any prior research, so for the three of us, it was really challenging. Before we formally began the competition, we had to go through a simulation which was organized by the committee of education. After this simulation, we realized that there were many challenges that we needed to address. For instance, because it was done online this year, we had to film a video of us debating which was then posted on to YouTube. Creating the video was very problematic for us due to a variety of factors, such as latency and time limit. However, with the aid of Ms Niken, Ms Shinta and Ms Devina we were able to create the video with ease, which gave us, confidence to participate in the real competition. Not only did they support us during the competition, they also scheduled meetings and trained each of us individually, so when the real competition began, we would perform at our best

Leading up to the competition, Ms. Niken had one final meeting with us where we went through everything we had learnt prior to the competition. We addressed the problem of time, with a pre-made debate structure. This was extremely helpful in my opinion, as one of the biggest issues that I have is debate structure. Thankfully on the day of the competition we were all confident and all our videos were created without any issues. A few weeks after the competition, the results were released. I was lucky enough to be placed in the top 10 for the whole Jawa Timur Province. When I first saw the results, I was extremely euphoric. My achievement, I believe, reflects all the hard work we put in as a team.

I would like to thank Sekolah Ciputra, all the staff members and teachers for giving us this opportunity. I hope that one day we can join another competition like this, so we can represent Sekolah Ciputra with pride!