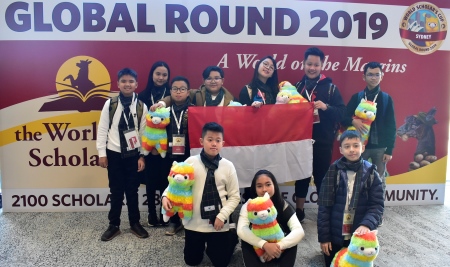 We, as in my teammates (Arthur Jayden Kusumah and Maxmilliant Justyn Gunawan) and I, made it to Sydney two days before the World Scholars Cup (WSC) started so we wouldn’t be jet-lagged when the programme started. The first day of WSC included an opening ceremony, keynote speech, lunch, a scholar’s scavenge, and dinner and a cruise. During the opening, we watched the people who hosted WSC on stage. There was Dylan, Robert, Joga, Chauncey, and Daniel (the founder of WSC). Now, what makes WSC different is that they make many, many jokes while talking. It makes the audience, including me, eager to listen. They made us laugh with all their jokes. We watched a native Australian and he showed us many things native to their country. The performance was indeed very unique. After that, we listened to the poem writer of the famous “What Type of Asian Are You”, Alex Dang. He showed us slam poetry and how to do it.

After lunch, we played the Scholar’s Scavenge. We were put into groups for the Scavenge. The group names are of countries through to places like Jurassic Park, Area 51, Asgard, etc. But, just because your group’s name is a country, it didn’t mean you had to be a citizen from the country. This scavenge was different from most scavenger hunts. We got points for doing tasks. The tasks were like doing as many pushups as possible, singing Bohemian Rhapsody, waving to people, etc. From doing the Scavenge, I made many new friends. We then had dinner and a cruise. We got to see the Sydney Opera House and so much more. My teammates and I were the only ones from PYP,  so we grew closer to the Sekolah Ciputra High School students.

We had a free day on the second day of the WSC meaning we got to go around Sydney. The third day was when we put all the things we studied for into action. The WSC was held at Knox Grammar School. For the Scholar’s Debate, we had to debate three times with three different groups. We then had lunch before we had the scholar’s challenge. Finally, we did the Collaborative Writing. We had dinner afterwards as we needed energy. For what? For the Scholar’s Ball. This is where we got to relax and have fun. There were many songs playing and we had so much fun. The WSC team was dancing on the stage. We met so many new people and got to meet the new friends we made during the Scholar’s Scavenge. After it all ended, I was exhausted. This day was the day where we needed most our energy. The next day, we had the Scholar’s Bowl, watch the debate showcase and the scholar’s show, get alpacas, and the cultural fair. The cultural fair, we got to show everyone our culture but we also got to see and learn other cultures. I got to see that there were in fact, many different countries joining the Sydney Global Round.

The last day was the day we had all been waiting for. This is the day where we get our medals and see if we qualified to go to Yale or in other words, the Tournament of Champions. We won gold and silver medals. Every time we heard we won a medal, all of us were overjoyed. Finally, the moment we were really looking forward to and had worked hard for, was to see if we qualified to go to the Tournament of Champions. Our team was nervous but really excited. Then, up on the screen it said our team’s number. We rose from our seats raising our hands in the air with excitement. We were more than happy. Even our parents joined us for this moment of celebration. “WE DID IT!”, we yelled. At this moment I knew it was all worth it. It was worth the studying and learning we did which I have to admit, was very hard and tiring. But you know what they say, “No pain, No gain”.

Don’t cry because it’s over, smile because it happened – Dr. Seuss