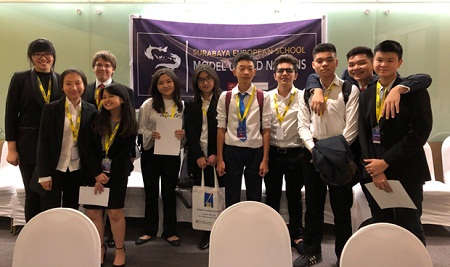 For years, the United Nations has tried to come up with the most suitable, least harmful resolution to prevent and combat cyber warfare and child labour.

Given that the countries assigned to us were rather controversial in the realms of child labour and cyberwarfare, the debates were a challenge from which we gained a lot of insight into the art of diplomacy. We learned a lot of new things, among them were the skills of effective negotiation, network building and public speaking A� la real UN delegates.

Whilst the main takeaways were the lessons learned and memories made at SESMUN, we are grateful to have been recognized with the following awards:

The Delegation of the Peoplea��s Republic of China (UNHRC)

Most Likely to Become a Billionaire

Most Likely to Become a President

Most Likely to Become a Dictator

The Delegation of the Russian Federation (UNGA)