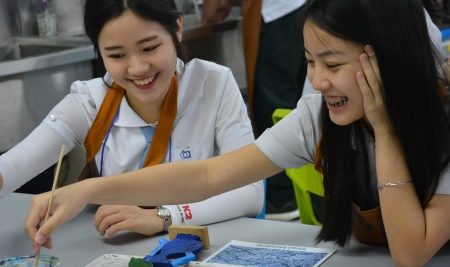 On Tuesday, 20th February, Sekolah Ciputra hosted a visiting school from Korea. Haeyeon Middle School from Busan joined us in a series of activities for the day. The purpose of this event is giving students from two different schools an opportunity to bond and learn something new from each other. Each school had 12 student representatives which joined the event. The activities consisted of painting wayang, a discussion about climate change and an assembly that showed Indonesian traditional dances and Korean style dances.

We started by working with strangers to breaking cultural barriers. This visit has taught me a lot; for example, it was initially hard for me personally to communicate with the students from Busan, but as a group, we soon started talking and began to realise that just because wea��re from different countries it doesna��t mean that we cana��t be friends. It may even come as a surprise to you that our different nationalities were the ones which bought us closer together. So, to all of you out there, I encourage you to take opportunities like these. As soon as you pass all the awkwardness and small talk, youa��ll soon realise that youa��ve learned new experiences, and maybe even found new friends.

How to Predict the Unpredictable Fo ...