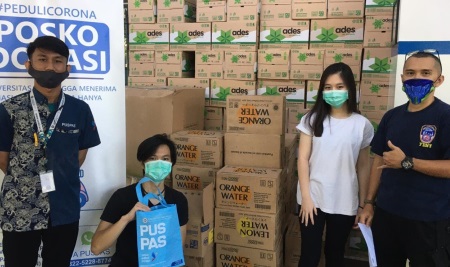 Before we actually started donating to the hospital, we made a social media account to get people’s awareness. We used Instagram as the platform because teenagers all over the world use this platform. As we received some donations we then planned and discussed what to buy with the group and help from our homegroup teacher Ms.Thressye and head of the Grade1, Mr.Diko. For the first half of the donation, we chose to buy hazmat suits since the hospitals are short of them. We chose hazmat suits because it is one of the most important things when handling this kind of virus as it is airborne and very contagious, hence the doctors and nurses that are handling this will need a closed up suit (hazmat), face mask and mask to protect them from getting contaminated by the virus. We got around 85 pieces of hazmat suits from the first donation. I myself went with Mr.Diko and the school driver to the hospital to deliver the hazmat suits.

We raised a total of Rp.28,344,157. We shared some of this money with Reagan and TIffany who did a similar project but aimed to get basic necessities such as daily groceries like rice, milk, cooking oil and etc.

By the end of June, we decided to spend all the money for those who work at the hospital such as security guards, cleaners, nurses, doctors and etc to help boost their immune system since they are in the front line fighting against this and they will need to consume a lot of vitamins. After we discussed within the group we decided to buy UC1000 which is a vitamin C drink. We got around 23 boxes of the bottles. It was quite hard to find, myself and other representatives of Grade 11-6, Jasper Lemmens had to go around and check different stores and find the best price for them. When we got what we could, we then chose a date to deliver the second batch of donations to the hospital. This time there were three of us, two representatives of the homegroup myself and Calista Sein who went with Mr.Diko to the hospital to give the donation.

I personally feel proud that we raised this much money and grateful that I have an amazing homegroup and leaders around me which helped us. From this event, I learned that giving something little might not change the world but it will change someone’s world for the better. Thank you to those who have donated and contributed to this Grade 11-6 project.