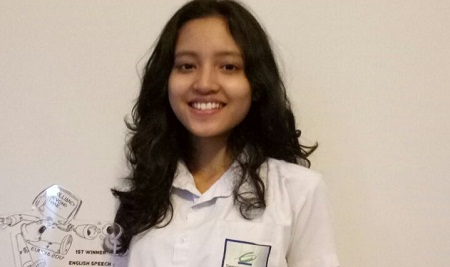 A Reflection from Dea…

Saturday,14th October was the semifinal round. We were given a speech from the committee and we only had 15 minutes to arrange it in our own words before the speech. The 15 minutes went quick and I wasn’t able to complete all my ideas, but thankfully I kept all the important information in my notes. Each of the ten contestants delivered their speeches and we were then given a 45 minute break. After the break, the committee announced that I was one of the finalist along with four other contestants.

I was one of the five remaining contestants who made the final round. We were each given a different topic about technology, and had to write a script for a 25 minute speech. We were allowed to do some research through printed and online materials. When the time was up, I was the first person that had to go up and deliver their speech. It was very tense as it was the last round and everyone wants to give their best shot. Also in the last round we had to speak on a small stage in the middle of the SMAN 5 school and there were so many passersby. At the end of my speech session, I was given a question by one of the judges from University of Brawijaya regarding my speech topic, which discussed how the millennials use technology to market their product.

Eventually, all the finalist finished their speeches, and it was time for the announcement. I was not sure about my speech, because the other four finalists were great, and each of them had a special signature on their remarks. However, when they announced my name as the winner, I was surprised, as I never thought that I could win in a speech competition.

To be honest, I don’t have experience in speeches and even sometimes I find myself struggling with grammar. However, I was willing to try and test myself. Learning from my experience, I think every student in Sekolah Ciputra is able to do the same. Unconsciously, we have been practicing public speaking in lessons like presentation projects in science or reading a poem during English. It is your choice whether you are bold enough to try something new. Like me, you might surprise yourself.