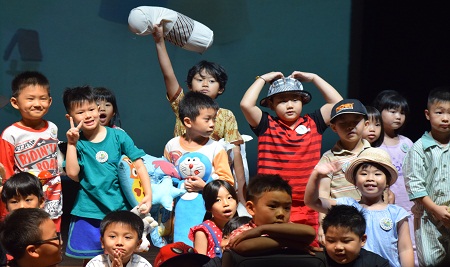 Sekolah Ciputra as an IB PYP school, facilitates students to experience the sharing of their learning to peers and parents through a regular assembly. The PYP Fortnightly Assembly at Ciputra Hall is held to provide the students with an opportunity to express themselves.

The assembly on November 20th, 2017 was led by PYP 1 students. They celebrated their learning journey of the inquiry unit, How We Organize Ourselves. They shared how they used public spaces and showed some ways to maintain the public spaces around them as a part of community which they learned through the collaborated learning of all subjects such as Performing Arts, Language, Mathematics, Religion and Physical Education. They performed role plays about public spaces both in English and Mandarin. They sang and danced in Bahasa Indonesia to demonstrate how to use prepositions a�?dia��, a�?kea��, a�?daria�� through songs.

On reflection, students said they enjoyed presenting the assembly as they had a chance to share what they learned to others and parents. They were proud of the performance and felt confident being on stage. PYP 1 parents gave a positive response about the assembly and appreciated how the students could perform confidently.

The PYP 1 Fortnightly Assembly also celebrated the International Childrena��s Day and PYP4 students read the Convention of the Rights of a Child.
PYP1 are definitely looking forward to the next opportunity to lead the assembly!

How to Predict the Unpredictable Fo ...